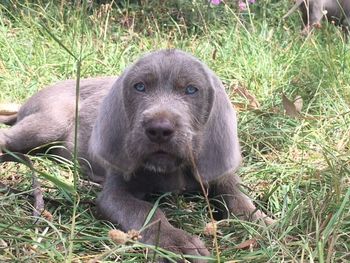 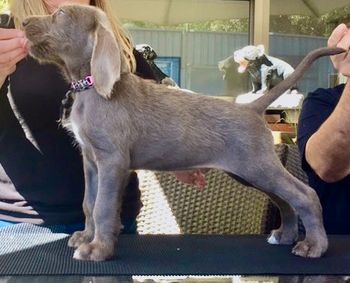 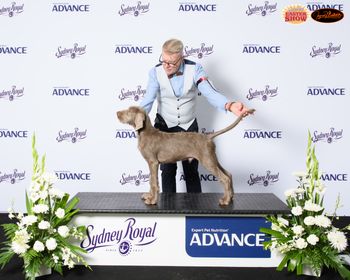 Sydney Royal Easter 2022- The first WSP to be shown 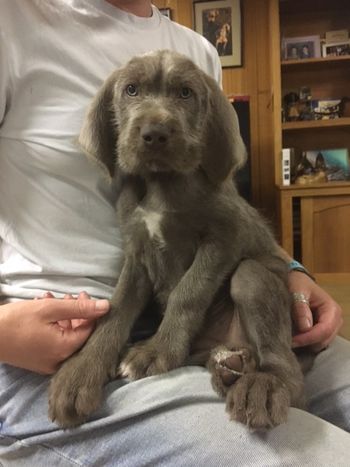 We are the first breeder to own and show a WSP in Sydney NSW.

The Slovak rough-haired pointer is a breed that originated in interbreeding.

Until 1973, such dogs were entered into the Slovak Stud Book under the breed name Rough-haired Weimaraner. From 1973 onwards, they have been registered as an independent breed.

The Slovakian rough haired pointer (Wirehaired Slovakian pointer) breed has had slight input from the German Wirehaired Pointer and Pudelpointer as well. The father of this breed, Mr. Koloman Slimak, wanted a dog with great stamina which would track, point, retrieve in water or land, and be suitable for a range of prey from birds, hares and other small animals, and large game up to the size of deer.

The breed was accepted by the FCI in 1985 or 1995 and categorized as a Continental Pointing Dog of the braque type. Is a relatively new breed.

With a body type much like the three breeds from which its foundation stock was derived, the Slovakian rough haired pointer has an intelligent, alert expression and a "rough" or "broken" coat, with harsh, wiry hair and whiskers ("facial furnishings" or, informally, "moustaches") like those of the German Wirehaired Pointer or the Cesky Fousek.

The coat is of moderate length in any shade between a tweedy gray-brown and the classic pewter-silver coat of the Weimaraner. The eyes may range from the deep amber of the German Wirehaired Pointer to the light shades seen in the Weimaraner.

White is permitted on the chest and feet. Lighter and darker shades of gray are permitted throughout the coat, even to the point of speckling. The FCI standard further requires a dark nose, eyelids, and pads of the feet; a scissors bite; and a moderately sloped stop of about 45°. Per the FCI standard, the tail is docked at 50% of natural length, and the dewclaws are removed. The back is straight, and the height at the withers ought to be from 62–68 cm (24–27 in) for males and from 57–64 cm (22–25 in) for bitches. The FCI standard also states that "the ratio of length of the body to the height at the withers must be of 10:9 in the males and of 10:8 in the females."[2]